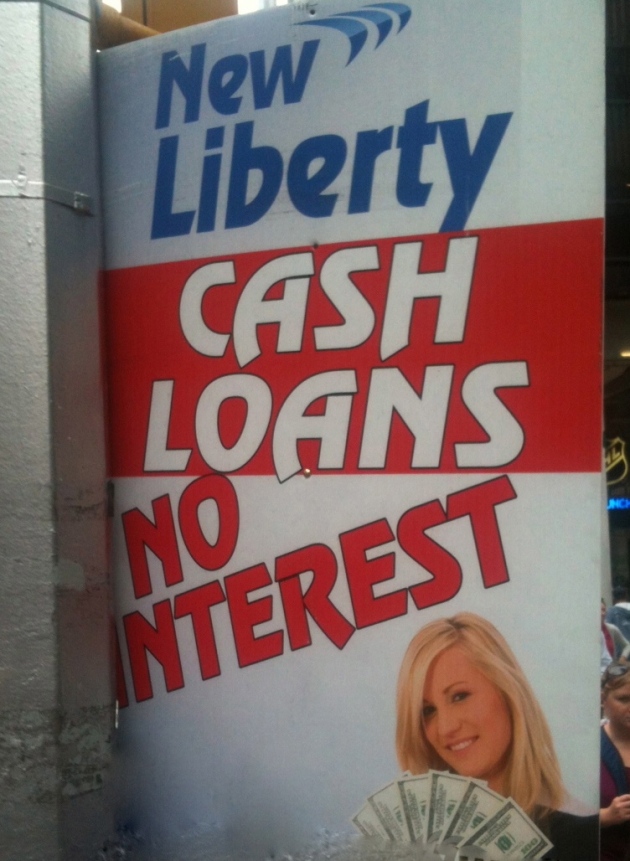 A loan with no interest? That pretty lady with the cash makes a strong case.

If you work in Midtown Manhattan like I do, you may have seen this sign. It’s for a pawn shop which has employees man street corners in the area holding up this advertisement. Since I started working in Midtown a few months ago, I’ve been fascinated by it, because I think it captures a lot of what’s wrong with personal finance in America.

The reason this sign is so spectacularly horrible is that it combines the concept of “liberty” with a too-good-to-be-true offer of a no interest loan. It asks of the passerby, Why are you toiling away, living so meagerly, while you could have freedom by means of a fistful of cash?

Of course, money doesn’t buy liberty, at least not a complete sense of liberty. But even more basic than that truth is the fact that there is no such thing as an interest-free loan, at least not one offered by pawn shops that intend to, you know, stay in business. The concept of “no free lunch” applies very well to finance: you have to pay something in order to borrow someone else’s money. Usually that something comes in the form of an interest rate, but it can also be a fee, something you already own, your labor, whatever. In this case, it’s probably a fee. So though there’s no interest rate on the loan, you’d better believe you’re paying something to borrow the money.

This type of arrangement is common these days. It’s often used as a way to entice the borrower with the false notion of great deal on a loan, when in reality the fees or other aspects of the loan would work out to an exorbitant interest rate if they were actually factored in as interest payments. The traditional examples are payday loans — short-term, high interest loans made to people anticipating an upcoming cash payment — or loans for consumer purchases of things like furniture and appliances. They are commonly marketed towards people with lower incomes and poor credit. In most cases, the lender effectively charges a staggeringly high interest rate. The problem with them is that they often trap the individual in a cycle of borrowing at high rates, paying so much to service the debt that the only option is to take on more of it. Even without that disaster scenario, you could make the argument that it incentivizes impulsiveness and disincentivizes saving for the future.

Religion has had a complicated and evolving relationship with finance. Some religions don’t allow for the charging of interest (Islamic finance gets around this by compensating the lender in other ways). Baha’is are not in that category; we are allowed to borrow and lend with interest. All transactions have to carried out in a spirit of fairness, however. And Baha’u’llah tells us to exercise moderation in all things, and on countless occasions celebrates poverty in terms of material things and richness in things like faith and a good character. The point is, the Baha’i Faith certainly allows for free financial markets, but ones that are regulated by laws as well as our own ethical behavior.

So, is this type of lending — specifically, loans marketed as great deals but which effectively charge high rates of interest, and are marketed heavily towards people with lower incomes — something to worry about? If you believe in the hyper-rationality of economic decision making, then you can safely say that this kind of lending is ok. By that line of thinking, we might assert that people will only take on the loan if it actually improves their wellbeing, case closed. But like I’ve written on this blog in the past, the assumption of rational decision making in economics is intended for the purposes of yielding a clean and elegant mathematical result from theoretical models. It’s not a statement about the human condition; most economists understand that there are plenty of examples of people behaving irrationally in real life.

Certain experiments have in many cases proven that individuals in fact not behave rationally when it comes to personal financial decisions. One of my favorite examples is an experiment conducted in South Africa, where it was shown that simply showing an attractive woman’s face on loan marketing materials had roughly the same impact on people’s chances of taking up the offer as lowering the interest rate by two percentage points.

My own personal opinion is that, yes, this type of business probably has a significant negative impact on our society. Like I wrote above, persuasive styles of marketing have been around for a long, long time. And there is nothing new about shady financial transactions. But I also sense that in my lifetime there has been a proliferation of this type of thing due to a range of factors — maybe a cultural shift towards glamorizing “getting rich quick”, maybe the stagnancy of real incomes and the associated economic desperation of the middle class over the past generation, or maybe just low interest rates.

Whatever the reason, the result, I think, is that more of us get trapped in even more difficult financial circumstances than what we started with, especially when we take on this debt for the purposes of consumption (by which I mean buying things we enjoy) and especially when we don’t fully understand how difficult it might be to pay back the loan. What that means is that this type of business encourages us to make the impulsive decision to borrow and spend now, rather than investing for the future. That’s particularly a problem at the lower part of the income spectrum, given that investment (for example, college tuition) is the principal way that people can dig themselves and their loved ones out of poverty.

Unfortunately as is the case for a lot of life’s problems, this is too hard to legislate away. It’s tricky to just ban high interest rates or certain categories of loans; you might end up eliminating certain lending that’s actually economically justified and productive, for one. And as we were so painfully reminded in 2008, the problem of sneakily-marketed, shady loan offers goes way beyond payday lenders and furniture rental companies.

Don’t get me wrong: smart financial regulation is important. But there is an issue on our side as well as borrowers. Some of us might take on certain loans simply out of desperation, not out of impulsiveness. I get that. But for the rest of us, it’s about recognizing and transcending our material appetites, something which to me has as much to do with making sound economic decisions as it does with, for instance, controlling an addiction or keeping our anger in check.

Transcending those material appetites is not easy to do, but it’s something that prayer, meditation and — dare I say — submission to a Higher Power can help a lot with. This is a central teaching of many religions and is described in different ways. In the Baha’i Holy Writings this concept is commonly called “detachment”, and is at the very heart of what it means to be a Baha’i. It’s not about simply avoiding wealth or other material things, but avoiding the emotional attachment to those things even as we use them and enjoy them. It appears in countless passages, but two beautiful ones are:

Cleanse thyself from the defilement of riches and in perfect peace advance into the realm of poverty; that from the well-spring of detachment thou mayest quaff the wine of immortal life. (Persian Hidden Words, v. 39)

Barter not the garden of eternal delight for the dust-heap of a mortal world. Up from thy prison ascend unto the glorious meads above, and from thy mortal cage wing thy flight unto the paradise of the Placeless. (Persian Hidden Words, v. 55)

We typically don’t think of religion and spirituality having much to do with our economic welfare, let alone the decisions we make with regard to our own personal finances. But I feel that they can have a tremendous benefit to society simply by helping us avoid our own economic stupidity. In many areas of life, things like prayer and meditation can act as an opportunity to step back from our daily lives, take a deep breath, and think a bit more clearly about the wisdom of our decisions. Why should our personal finance decisions be any exception?

6 thoughts on “The tyranny of bad personal finance”