Pew Research recently came out with a fascinating study across a number of countries asking individuals about life satisfaction. The results are pretty interesting, and I’d recommend taking a look at the summary here. 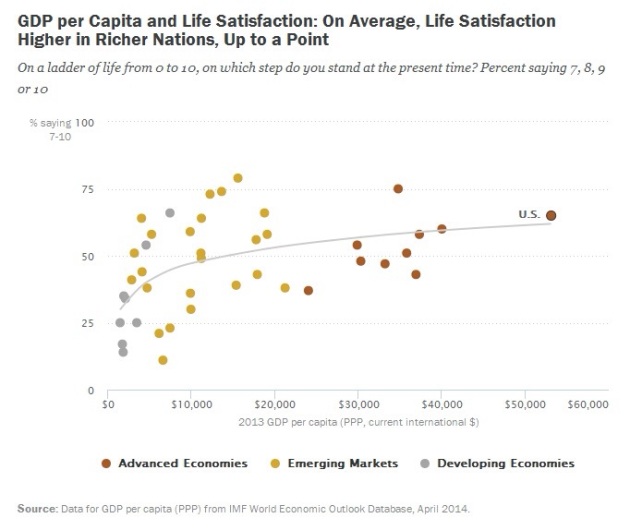 One of the most intriguing charts that Pew presents (see above) is a scatter plot of countries, with average rating of life satisfaction on one axis and per capita GDP on the other. Not surprisingly, there’s a positive correlation between income and satisfaction, meaning that people in wealthier countries tend to be more satisfied with their lives than people in poorer countries. But we also see that the very wealthy countries (like the United States) aren’t significantly more satisfied than the middle-of-the-pack countries, echoing previous research on this topic. In fact, the country that rates highest in terms of life satisfaction is Mexico, where per capita GDP is about $10,000 per year, roughly a fifth that of the US.

END_OF_DOCUMENT_TOKEN_TO_BE_REPLACED

Rainn Wilson, the comedic actor best know as “Dwight” from The Office, delivered a brilliant commencement speech to the graduating class at USC a couple of months ago. For those who aren’t aware, Wilson is one of the world’s best-known Baha’is, and has never been shy about broaching the topic of spirituality, especially with young people. Here he was at his best.

The topic of the speech was, more or less, how simply “pursuing happiness” can leave us feeling empty and unsatisfied, and how an attitude of selflessness can bring us a deeper feeling of fulfillment. Here’s an excerpt (a long one, but worth reading in its entirety):

Happiness is so fleeting. It’s like an amusement park ride. It’s like cotton candy. I mean, it looks so amazing: It’s delightful and fluffy and pink and you joyously eat it and then almost immediately regret your decision. Your fingers are sticky the rest of the day, and you’re undergoing an almost immediate insulin crash from the half pound of sugar that you just sucked down. You’re hungry again almost immediately and you begin the chase again for ingestible happiness right away. Happiness in our contemporary culture is something to be chased, something that’s just around the corner, something outside of ourselves. There’s a kind of a “if then” proposition about happiness. For instance: “If I get a job at a top law firm then I will be happy.” “If I get married to the perfect man or woman then I will be happy.” “If I can become more popular then I will he happy…” etc. It’s the whole point of commercialism, too, and materialism. If you buy this car, eat this cheeseburger, wear these jeans, use these headphones, then you will be happy. And you know what? Buy the jeans, eat the cheeseburger, the result is never happiness. Joy or contentment. It’s always the same. We’re never satisfied. It never meets our needs fulfills our standards. We’re left empty, wanting something more. It’s cotton candy. Fleeting, sticky, unsatisfying….

Volunteering, helping, showing kindness, sacrificing your time and energy, giving selflessly, these are the things that will give you the greatest human flourishing. And what a strange dichotomy in this “me me me” culture we live in. Focus on yourself: you’ll find only misery, grasping, depression, emptiness, dissatisfaction. Focus on helping others: joy, contentment, gratitude, happiness… So go forth young men and women spiritual beings all, with your pieces of paper, your souls and your hearts, go forth and undertake our new national motto, “life liberty and the pursuit of service”, and your lives will be the richer for it.

This is potentially tricky territory — I mean, the speaker is basically telling young people at one of the happiest moments of their lives not to strive to be happy — and I truly admire his courage. But the main message here should not be controversial. That’s because, as pointed out in the speech, science actually confirms that acts of selflessness tend to lead to greater happiness. (Nevermind that it represents a core teaching of nearly every religion.) And yet, from my perspective the fact that selflessness, rather than selfishness, is more likely to lead to fulfillment and life satisfaction gets a shamelessly low level of attention in the modern discourse. Instead, we are hit with a steady stream of messages preaching the opposite, including the semi-sarcastic-yet-inescapably-depressing image below, which I captured at our local mall food court:

In the same tradition as the religious faiths founded before it, the Baha’i Faith in countless passages warns us not to rely on the material world for fulfillment. One of my favorite passages written by Baha’u’llah is this one (which I’ve shared before), which compares the world itself to a desert mirage:

The world is but a show, vain and empty, a mere nothing, bearing the semblance of reality… Verily I say, the world is like the vapor in a desert, which the thirsty dreameth to be water and striveth after it with all his might, until when he cometh unto it, he findeth it to be mere illusion.

For us to look to something bigger than the world around us is not an unnatural act or suppressing our natural selves. The human being’s true nature, Baha’u’llah teaches, is more noble than that. In the same passage as the one above, He compares the childish obsession with our material lives with a fallen bird:

Ye are even as the bird which soareth, with the full force of its mighty wings and with complete and joyous confidence, through the immensity of the heavens, until, impelled to satisfy its hunger, it turneth longingly to the water and clay of the earth below it, and, having been entrapped in the mesh of its desire, findeth itself impotent to resume its flight to the realms whence it came. Powerless to shake off the burden weighing on its sullied wings, that bird, hitherto an inmate of the heavens, is now forced to seek a dwelling-place upon the dust.

Why is this so difficult for us to learn? How come we feel compelled to chase after things that are so ineffective in delivering real happiness? It’s universally acknowledged that true happiness can’t easily be achieved with material things. And yet, we still keep reaching for the cotton candy.

In my last couple of posts (see here and here), I made the case that religion and spirituality can help us control our impulses and make sounder decisions, and by doing so, we can improve not only our spiritual but also our material wellbeing.

There’s a branch of research that studies this type of thing (though not the religion part), specifically people’s ability to control themselves and the implications of this trait on their lives. In one famous example, researchers tested kids’ ability to delay eating a marshmallow in exchange for a payoff of more marshmallows later, and correlated their ability to do so with intelligence and achievement.

Today I came across an Atlantic article online about a recent study linking self-control to feelings of satisfaction regarding one’s life.

Here’s how the study worked (summary from the Atlantic):

To start, 414 adults completed an online survey, in which they rated their self-control by indicating how much they agreed with 14 statements (such as, “I do certain things that are bad for me, if they are fun”). The participants also reported their current emotional state as well as their overall life satisfaction. Holfmann’s team then turned to data from a study in which 205 adults were given smartphones and prompted to report their emotions at random moments throughout the week. At the same time, they were also asked to report whether they were experiencing any desires, and if so, how hard they tried to resist them, and whether they ultimately ended up acting on them.

The study indeed concluded that “[Trait self control] is positively related to affective well-being and life satisfaction”.

Now, I can see a few potential problems here. Just to take one example, is it possible that self control and happiness are correlated because the second causes the first, rather than the other way around? Maybe a third factor is the real cause behind both self control and happiness? And can we really trust people’s reporting of their own emotions to indicate how satisfied they are with their lives?

But these are problems that you encounter with a wide range of social science research. There are very rarely any smoking guns, just evidence that seems to point at a particular truth. To me at least, it doesn’t seem like a such a controversial idea that if you can get a hold of your life and not let your impulses dictate your decisions (at least, not too often), in the long-run you’ll be better off. And if submitting to a Higher Power somehow seems to help us control ourselves, and controlling ourselves seems to increase happiness, then shouldn’t it stand to reason that spirituality and religion can help us to be happy?

It’s not rocket science (well, it’s social science I guess). Anyway, I think this is a missing part of the debate over the usefulness of religion in modern society.