Income inequality is a hot topic these days here in the US, and for good reason: over the past generation or so, real gains in income for those at the bottom and middle of the spectrum have been practically nil, while those at the top (especially the very top) have risen rapidly. As a consequence, income inequality by some measures is at its highest levels since the 1920s. 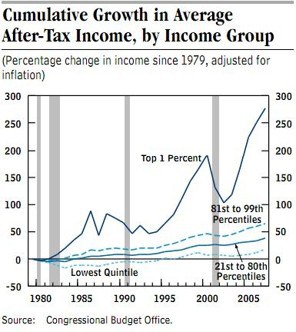 If income inequality has been rising for so long, why is it only recently getting so much attention? I think the main reason for the recent attention was the housing bust and financial crisis in 2008 (duh), which provided a shocking contrast between widespread home foreclosures and mass layoffs on the one hand, and generous bank bailouts on the other. But since then, we’ve had plenty of other things to keep our attention on the subject. I’m thinking the Occupy Wall Street/99% movement; the 2012 Presidential election, which forced a national dialogue on the subject; and the near-celebrity status of economist Emmanuel Saez, whose recent book has attracted huge media attention.

Within that debate, economists continue to fuss over a longstanding question: Sure, inequality is rising, but what does that mean for economic growth? Do societies in which the rich take a bigger and bigger slice find it more difficult to grow the whole pie over time?

The Washington Center for Equitable Growth has a new paper summarizing the research, both old and new, on exactly this topic. It’s a good read even if you’re not into economics, especially the overview section, which gives some nice context for this question. Among the report’s conclusions are:

Most research shows that, in the long term, inequality is negatively related to economic growth and that countries with less disparity and a larger middle class boast stronger and more stable growth. Some studies do suggest that in the short run, inequality may spur growth before hindering it over the longer term, but overall there is growing evidence that, in the long run, more equitable societies are associated with higher rates of growth.

It’s always important to differentiate between positive and normative questions in economics, and this subject is no exception. The former asks something about how the world is; the latter, how the world should be. Economists like to focus most of their time on positive issues: Does inequality constrain growth? That is an important question, and researchers and organizations which focus purely on answering it objectively and honestly are doing very important work. Nonetheless, what seems to be missing from today’s debate about inequality is a second, more normative question: If the economy continues to grow while remaining very unequal (or becoming more unequal), is that ok?

For two reasons, I’d say the answer is No (surprise!). The first reason has to do with economic theory. The second has to do with the very purpose of our lives as human beings. END_OF_DOCUMENT_TOKEN_TO_BE_REPLACED